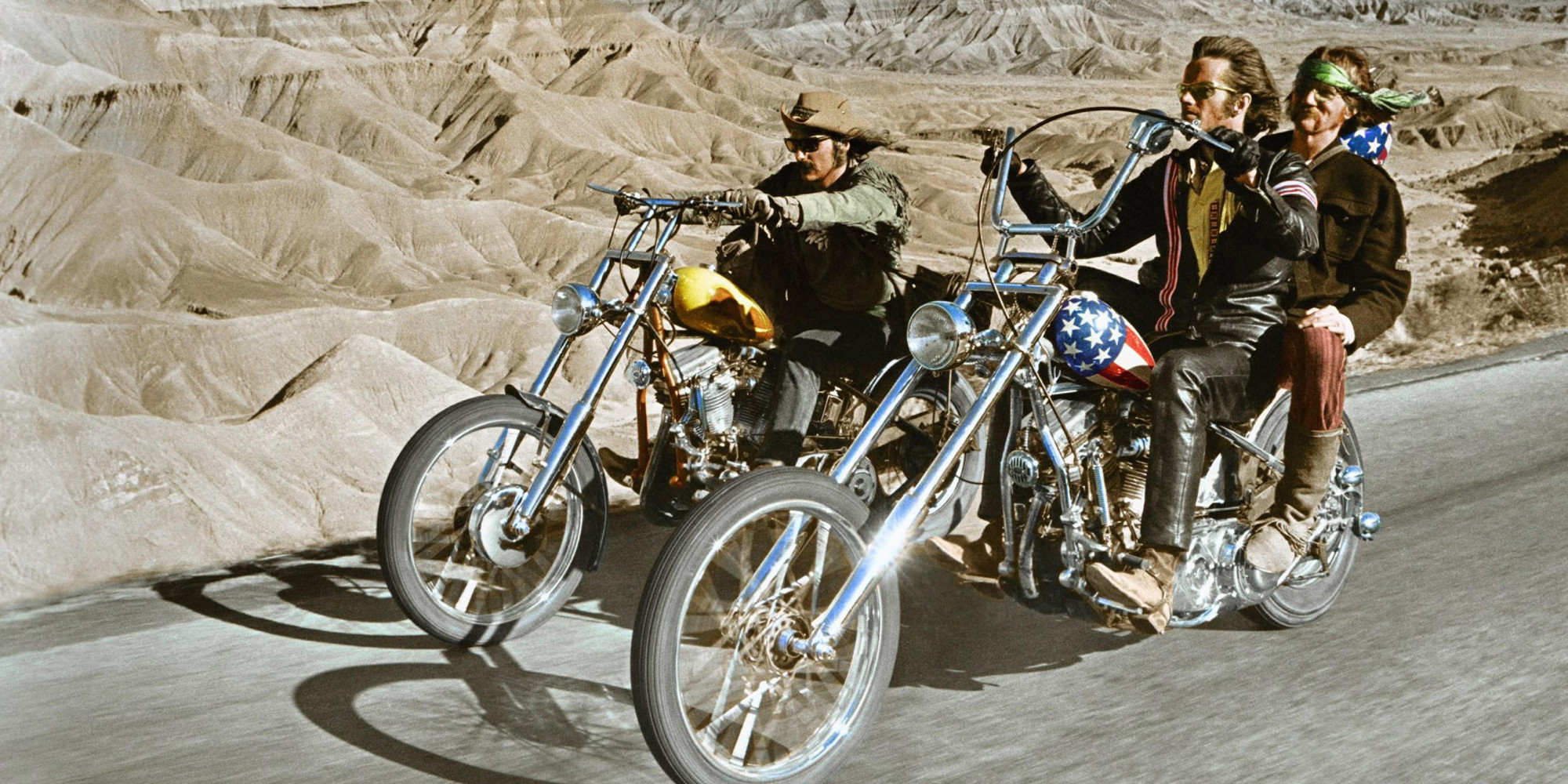 At the forefront of the 60s New Hollywood movement, Easy Rider (1969, dir. Dennis Hopper) uses sex and violence to appeal to a new kind of cinematic audience whilst taking a clear anti-violence stance that reflects the on-going peace movement at the time.

Heavy changes in industry and technology in the 1950s led to a fragmentation of the American film audience. Targeting specific demographics became essential for marketing films and one such group was youths aged 16-24. This group grew in popularity and by the late 60s, studios were making specific ‘youth cult films.’ These lower budget productions had a contemporary edge and used elements of exploitation ‘B-Movies’, bringing the genre into the mainstream and were characterized by “narrative complexity, the foregrounding of cinematic devices, generic hybrids, and taboo subject-matter.”[1] Easy Rider is a clear example of this new cinema with its heavy use of sex and violence a clear marker of its exploitation roots, appealing to this young, hungry audience. However, in the 60s, America was also undergoing a cultural revolution – the peace movement. A response to the Vietnam war and the general violence of America at this point in time, this movement included controversial actor Dennis Hopper who supported the cause with his art. This became Easy Rider, a film that cried out for a freedom that couldn’t be found whilst mixing in elements of ‘Hippie’ culture and a clear anti-violence statement.

The protagonist Wyatt AKA Captain America (Peter Fonda) is an obvious symbol of American freedom, his bike and jacket each carrying the American flag and his cinematic quest being to literally find freedom. The final act of violence in the film, as he and Billy (Dennis Hopper) are gunned down in a random shooting, symbolizes the violent nature of America as self-destructive; destroying the patriotism and idea of freedom at the heart of the American dream from within. Along their road trip, Captain America and Billy stop to camp at several abandoned towns and hamlets, abandoned shacks and cars partially burner or destroyed makes for a strong backdrop in their quest for freedom suggesting a history of violence long embedded in the USA. One of these abandoned places stands next to a hippie colony where the two venture. The contrast between the barren shells of former homes and group of suggested graves next to the life and freedom exhibited by the hippies fully supports this way of life showing how peace and freedom over violence is the way to live. However, this colony is clearly starving as they struggle to plant food in the barren desert forced to be home as it one of the few places untouched by man’s violent nature. With freedom, Hopper chooses to make them sexually charged with clear desires from the hippies and our two protagonists to ‘make love, not war.’ Immediately one of the woman makes a comment about Captain America’s beauty and Billy makes several forward advances to another. This culminates in a skinny-dipping scene where the act of sex is suggested and not shown yet the ruins in which they swim are obvious – the act of sex, embodying freedom, happens in a place destroyed by man’s violence. The two themes are opposite yet eternally intertwined. Regardless of what is shown, there is still  a strong sense of the exploitative sexual themes used in B-movies that the late 60s were bringing into the mainstream where “women are reductively marginalized as either burdens or sex objects.”[2] The only other female characters featured are prostitutes who appear later in New Orleans, again their only purpose is to be sexualized and appeal to a certain audience, with nakedness again shown during the acid trip in the third act. With his forward advances and more possessive mannerisms, Billy fits more into the “the sexual politics of 1960s biker flicks” which “were rooted in notions of masculine individualism, aggression, independence, and control”[3] while Captain America seems more subdued, even respective of women in his stoic nature; confused about what to do when his prostitute refuses the offer of a drink – the traditional way of starting an encounter with a woman. Again, if we look at him as a symbol of true American freedom, this more respectful, stoic manner presents the idealization of this way of living and also turns the old cliché of dirty, rotten sex-crazed bikers on its head.

George Hanson’s (Jack Nicholson) monologue is an obvious but important criticism of American government and its choices regarding the Vietnam war. He states that the aliens are more evolved as they have no war and no leaders; our own government hiding information about them to stop us learning about a way to live without violence, a way to evolve in regards to both individuality and equality. High on marijuana when making this speech, Hopper draws comparisons between the substance, a symbol of the peace movement and hippie culture, and opening one’s eyes about the evils of violence and the oppressive power of the American government – a statement of support in favor of the peace movement. George also makes comments that relate to the random acts of violence throughout the film, stating that it is their freedom that makes them vulnerable for when other people who are not free see someone who is, they will become violent in a desperate attempt to take back what they don’t have. This speech is given greater emotional impact by its juxtaposition with the beating of our protagonists and the murder of George, the quick succession of shots creating a wild ferocity that gives their attackers, a group of men shown previously in a diner, an almost inhuman violent nature. These previously normal-seeming men have been twisted into murderers for no reason other than our protagonists looking different and being free. These men want to cage them like animals, to hurt them and one is even a member of the law enforcement, again suggesting the violent nature of government. Our protagonists and the other people they come across all seek freedom, from the hippie group to George Hanson, they are all “doomed rebels or sacrificial victims of straight society.”[4] Hanson’s death is then juxtaposed with Billy and Captain America eating at a restaurant, their casualness making the horrific violence seem normal; a part of everyday life.

The hopelessness of their search for freedom builds to the third act where, with their prostitutes and a dose of LSD, we see the true despair and desperation behind their seeming calm. The trip sequence in the graveyard uses a quick succession of striking images that bring a sense of entrapment to the pair, trapped behind bars and between monuments honoring the dead. They make love on these graves, over the bodies of others; symbolizing the cost of freedom and the violence everywhere that taints their attempts to have peace and resist man’s nature to fight and kill. Captain Americas childlike cries and pleas to his mother fully embody the “terror, disillusionment, and death, the self-confessed failure and futile demise of its protagonists reflecting a darker turn within antiestablishment attitudes between 1967 and 1969.”[5] Destroyed themselves in an act of pointless violence, their journey towards freedom quickly ends and the camera flies away in a crane shot from the burning wreckage of Captain Americas motorbike; we are reminded here how small and inconsequential their death was in the expanses of the USA through seeing it literally and realize the scope of what must be done if everyone is to experience some level of freedom. With the bike, a symbol of America and home of the money that Billy falsely believed was the key to freedom, Hopper is making a final statement that violence will ultimately be the death of America and the key to true happiness and freedom is not wealth but love and peace: “The optimism of the open road, therefore, ends in the disillusionment of a shotgun blast-a disconsolate metaphor for the collapse of liberal ideals in the face of burning inner-city ghettoes and the trauma of the Vietnam War.”[6]

In conclusion, Easy Rider uses sex and violence to appeal to the exploitation B Movie audience of Postclassical Hollywood and to criticize the base violence of human nature and America in the 60s entering the Vietnam war; its criticism is a direct support of the peace movement and hippie culture.

[4] Heffernan, Nick. “No Parents, no Church, no Authorities in our Films: Exploitation Movies, the Youth Audience, and Roger Corman’s Counterculture Trilogy.” Journal of Film and Video 67, no. 2 (Summer, 2015): 13

[5] Heffernan, Nick. “No Parents, no Church, no Authorities in our Films: Exploitation Movies, the Youth Audience, and Roger Corman’s Counterculture Trilogy.” 11.